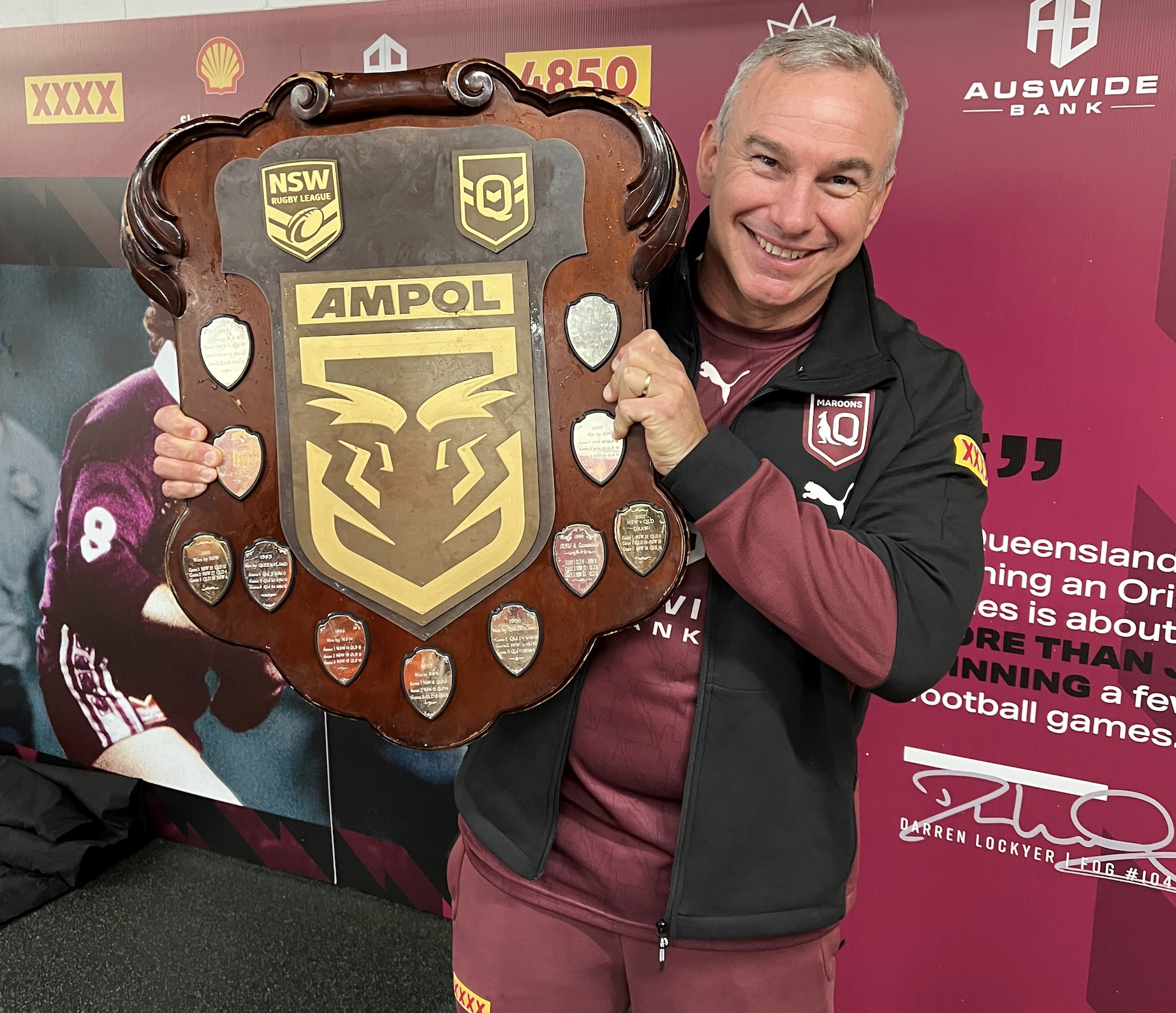 Steve Sartori founded his first physiotherapy clinic, SportsMed, in 1996, the same year he began working with the North Queensland Cowboys. Since then, Steve has continued working with elite sports teams including the Australian Rugby League team and now, the Queensland Maroons.

SportsMed has also since rebranded to the North Queensland Physiotherapy Centre and grown to three clinics, where Steve is still a partner.

We had the pleasure of sitting down with Steve and chatting all things QLD Maroons, what it’s like being an elite sports physiotherapist, how he got to where he is and more!

Can you briefly tell us about your experience as the QLD Maroon’s Physio at State of Origin? How did you come about taking up this role?

The past 8 weeks have been extremely busy but also very rewarding. The noise and atmosphere of a packed Suncorp Stadium in an Origin decider at home is unbelievable, and the pandemonium following Ben Hunt’s runaway try to win the series is something I will never forget.

It has been a privilege to be part of a staff and team of genuinely good people lead by a great coaching staff whom I have personally known for along time now. I have been fortunate enough to have worked with Billy, Cameron,  Jonathan and Nate during my past 25 NRL seasons, as well as Kangaroo tours over the past 12 years, and they are genuine down to earth characters.

Like many elite level positions, the role of State of Origin medical staff if not one that you can apply for. You are invited and it is earned. It took me 25 years to get that phone call. In my NRL club roll I have known and worked with each Queensland State of Origin physio since 1996, so I know each and every physio before me and they are people whom I respect and trust. Rob Godbolt was the previous head physio, and unfortunately due to the stresses and the large periods time that you are required to spend away from your family, he had to give it away. Rob did a great job, and I’m grateful for his insights and opinions for this year’s series planning. I’m humbled and very grateful to Billy for asking me to be part of this year’s series.

How would you describe the atmosphere last Wednesday night at Suncorp Stadium? Did you feel nervous before the games?

I’ve been lucky enough to be part of some big stage games in both the NRL finals and Australian representative games, but nothing has come close to the sights and sounds coming from 52000 fans on Wednesday night at Suncorp. It was difficult to hear anything being said by anyone, and it will take me a while to settle back down again.

I normally don’t get nervous before big games, but it was hard not to be a bit nervous before this game considering the COVID losses we had and then the early game concussions sustained.

Was it always your goal to be a Physio for an elite sporting team? If so, how did you turn your goal into a reality?

I had ambitions to play for the Wallabies at one stage, but that didn’t pan out for me so I think I tried to take those ambitions and convert them to be part of a sporting team in a different capacity. My pathway to where I am now is a very long one. My first position as a new physio graduate from Sydney Uni was at St Vincent’s hospital in Sydney which is very different to my current roles. It took a lot of work and continued study to achieve goals along the way. There are a few consistent themes that I’ve come across over time spanning elite sport, business and life in general. Hard work is usually the most consistent theme across all of them. The harder you work the luckier you get. Nothing is going to be given to you easily, you have to earn it. It’s pretty simple.

What’s the biggest difference about being a Physio for an elite team, compared with day-to-day private practice?

Some things are similar, but there are major differences surrounding time and expectations. In private practice you are ultimately answerable to your clinic, ,yourself and your patients. In my role, whether it’s at NRL club level or State and International level, my skills and responsibilities are answerable to multiple levels of people, ranging from the players and their families who rely on their income, to Coaches, S+C staff, Doctors, trainers and Executive Boards who rely on your management skills and communication to all parties. It is a very complex task where excellent communication skills and astute management is paramount.

Time is the enemy of all sporting codes with respect to injury management, and is the single biggest difference to private practice work. Repeat injury is the second biggest enemy, and can be an issue if management is too aggressive with respect to time. Elite clubs have the luxury of multiple people across multiple disciplines to accelerate injury management. Private practice physios should not try to emulate the return to play timeframes they see in elite level sport simply because they do not spend 8 hours a day with their patients, and have specialist doctors, rehab strength and conditioning staff, massage therapists, biomechanists or facilities to match professional sporting organizations. Giving patients unrealistic time frames and goals based on what they see and read with elite sport can be a trap to fall into.

In a high-stress and high-stakes environment, like Origin, how do you decide as to whether an injured player is able to continue playing? E.g. if Ponga goes down, how do you decide if he can continue to play or not? Who has the final call – the Coach, Physio, Doctor, Player?

Some decisions are simple. Xavier Coates high grade ankle syndesmosis injury in Game One was clearly visible on sideline video playback, and he was in obvious distress. His clinical testing in the medical rooms was consistent with what we saw on his video mechanism. He underwent surgery later that week back at the Melbourne Storm.

Other decisions are more complex are less clear cut. The role of the medical team is provide clear accurate information for both the player and the Coaching staff. If that information is not available during the course of the game, and if the player’s safety and well being is being compromised then it is the medical staff’s duty to remove that player from the field safely, even if that decision means the team will be compromised. There are many instances where we will sit back and observe, or assess in rooms if we are unsure, however a good medical team maintains integrity if the face of pressure.

Can you remember a time when a player wanted to keep playing whilst injured but you’ve had to overrule them?

Sometimes you have to save the players from themselves and their competitive nature. I distinctly remember Carl Webb playing for at least 15 minutes with a broken jaw and not wanting to come off the field. He ended up with 3 plates in his face the next day.

Is there a particular muscle group or prescribed exercise/routine that the average person would be surprised to hear NRL players focus on?

Every player is different and times have certainly changed to what they were. Yoga and Pilates are popular extra options that some players value. Recovery focus is the biggest change over the past decade, and it’s not uncommon for players to invest their own funds into compression boots, Game Ready units, massage guns, sauna’s, ice baths and massage.

What is the most interesting injury you’ve seen?

Injury patterns are fairly consistent in the NRL so there aren’t too many left field injuries that you come across. I’ve seen some very serious musculoskeletal injuries that don’t happen very often in normal practice, like hip dislocations. I’ve also seen some disturbing things like metastatic testicular cancer presenting as groin pain. You need to always be looking out for red flags no matter how straight forward some things may seem.

Can you recall a time when you diagnosed a complex injury or condition, how did you do it?

When we have a high value player sustain a serious long term injury, especially if it’s a complex case, the medical team will normally seek multiple opinions from different specialists. It is not a unilateral process, and the player usually will also have a say in what his management will be. You would be surprised at the variation in opinion from very experienced specialists across the country. For example, we have had 5 different management opinions regarding management of a complex shoulder rotator cuff injury in the one player. Sometimes it is necessary to pursue different opinions.

What is one piece of advice you would give to graduates considering a career in physio and want to have a niche in sport?

You need to work hard for a long time and be prepared to make sacrifices.

Will we see you on the pitch next year?

Hopefully I can wear the Maroon next year – I’ll have to wait and see.