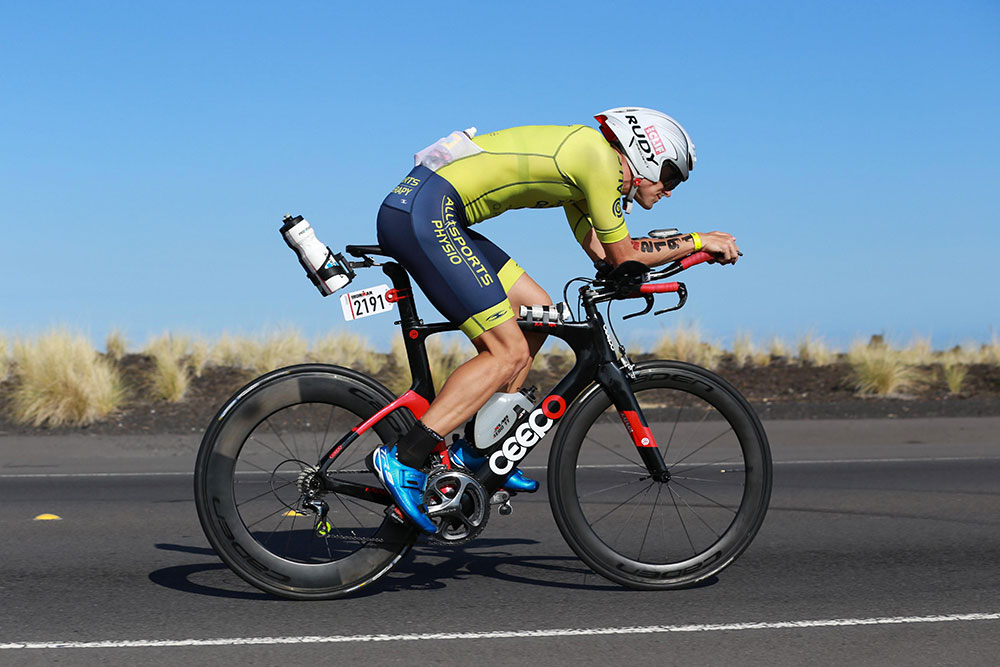 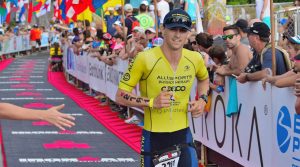 Jarrod Harvey is an amateur Triathlete with aspirations to become a professional within the sport from 2016 onwards. He has been involved in Triathlons since the age of 12 and has competed for Queensland as well as Australia throughout his schooling years. A four-year hiatus from the age of 19 to 23 allowed for the completion of his Bachelor of Health, Sport and Physical Education which is now utilised each day in his position as an HPE Teacher.

Tell us a bit about the 2016 Hawaiian Ironman and what it means to you?
So the Ironman Hawaii is the biggest one there is since I started doing triathlons I’ve always wanted to do Kona Hawaii – so the 3.8km swim, the 180km bike, and 42km run. And It’s through the Lava fields, which is pretty cool.

How do you go with juggling the work, life, and training commitments, and keeping a healthy balance?
*Laughs* I don’t. No, I’m a teacher so the hours tend to be pretty good. Generally morning session and afternoon session, and then being a PE teacher helps because you’re actually out, moving around and not getting all stiff.

Could you walk us through what a typical day in training would be like for you?
Umm so alarms normally. I’m a late riser, so I’m up at 5/5:15am usually something like that. And then I head to the pool or go for a run, go to work, depending on if there are work meetings, and then after school training, dinner and bed. Repeat.

Today, for example, you mentioned you were at training – what were you doing for 6 hours?
Yeah so today so I had a 5-hour bike with some specific race efforts, I had two 1-hour time trials in the middle there. It’s the kind of thing that the Ironman training the race takes 9.5 hours so your training as long. I have a very supportive partner, she understands.

So will that progress from 6 hours to more?
No, it won’t get any further than that, I’m probably at the peak of where training is now. Because I’m at what we tend to call taper down into the race – so its all on the downhill now. So this next coming week I have got, I think it’s about 14 to 16 hours of training.

We can imagine much like your training, surely your diet is just as strict?
It should be. *laughs* I’m actually engaged to a dietician. She’s good with that, Bree’s really good with that. I’m a sucker for a soft drink, like today I’d been riding for 4 hours and uhh yeah! But no I am working on getting my weight down because that helps obviously.

Was there any point during your training where you thought about backing out? What was your driving force?
This morning. Ahh it can get really boring and lonely, like this morning I usually try to train with a little bit of a group, try and do it with some mates, but this morning it was just myself. And then my phone went dead about halfway through so I had no music. Days like that, when it’s windy, you just think what am I doing. But when I get across the finish line it’ll be worth it. Probably. *Laughs*

What prompted you to try an Ironman in the first place?
Kona is typically pretty hard to get to so when I got into triathlons when I was 14/15 that sort of thing always appealed to me. I haven’t got much speed really, anything that’s fast kills me, but I can kind of do stuff all day. Yeah I just did a couple of half Ironman’s and that sort of stuff, but to be honest I entered my first full Ironman because I was sick of one of my best mates, who’d already done one, I was just sick of him ripping on me saying that I was only half the man he was because I’d only done the half. So, to be honest, I entered just to shut him up, and ended up doing pretty well, and now I really enjoy it.

So how did you qualify for Kona?
So there are two ways you can get there, one is a ranking system where the more you race the more points you accrue, and they pick people at the top. But the way I qualified was at each race they have slots. So I’m in the 25 to 29 Male age group, and my age group had two slots. So the first person to cross the line gets that slot, and the second person gets that slot, and if one of those didn’t accept then it rolls down to third and so on until all the slots are gone. The best way to do it is obviously to come first or second so you can secure a slot, so I was second which is good.

Incredible stuff that this is only going to be your second Ironman after qualifying in your first – is there anything that you plan on doing differently?
Well, I don’t really know. The swim doesn’t worry me, the bike concerns me slightly – like biking is my best leg, but you know it can get up to 45 degrees out at the Lava fields there and you just don’t get that here. Especially coming out of winter in Australia, you can’t really replicate that, so that does concern me a little bit. Just pace it on the run from what I’ve heard, it’s just a patience game. If you burn matches early, you don’t get them back. You’ve just gotta pace yourself, be really smart as to when you decide to spend energy. That’s probably the thing that’s the hardest part about it. Cause everyone feels good when you start the race, and that you want to go fast, like the first 50/60km on the bike you sometimes feel like you’re wasting your advantage because you’re not going as hard as you should be but it levels out. At least I hope like I said I’ve only done one.

Prior to training, what was your background in each of the 3 sports?
I was always a good cross country runner, I only started cycling when I got into triathlon, and I typically swim like a brick – at least I used to. I’ve worked really hard on my swimming, so swimming is a bit of strength now which is good. With my running that’s where Cam has been a big help, I originally came to Cam because I’d been to five or six other physios and all they’d do is put tape on me. And it wouldn’t work and didn’t fix anything. Then I was actually six weeks out before Busso (Busselton Ironman, WA) and I hadn’t done any decent running and I came to Cam desperate. He treated me with dry needling (with some big needles) and some rehab which fixed me. So I just kept coming back.

During your training did you see any setbacks in terms of injury?
I was into it when I was a junior and I stopped when I was about 19 until I was about 23 before I got sick of it and too much training, wanted to do uni, and do things that uni people do. All that sort of stuff and I came back and had some success in 2014, and then pretty much all of 2015 I was just injured. Like I would run for 2 weeks, and then I would spend 2 weeks injured. I entered Barren Boxum in January and I thought I had heaps of time, and then it was like late October early November and I still hadn’t run even 20km without pain and thought this wasn’t going to be good. So that’s when I came to see Cam, and I had about five visits in the space of fifteen days, and he was in here just hammering me. But yeah, he fixed me. That’s the hardest part is staying injury free because that’s how you build a strong body with consistent sessions every day, not missing a session. If you’re injured, then you can’t do them.

What would you say has been the most challenging part of your journey for the 2016 Hawaiian Ironman?
To be honest probably that work-life balance – I can do more hours and those sort of things but it’s just not viable at the moment. It’s not like being a golfer or a basketballer where you get big money, it’s probably only like the top 100 that make a living. The rest pick-up a bit of prize money here and there. The most challenging part is that I know I’ve got potential and have people like Cam who believe in me, but there’s only so many hours in the day. We’ll see how I go at Kona, but probably in a year or two, I think I’ll just do supply day teaching, just be called up to the school for a day or two. And Bree’s (Jarrod’s Fiancée) qualified as a Dietician so we’ve got her income now as well.

Lastly, what’s the most important piece of advice you can give to those out there already training, or those starting out?
Cam & Jarrod For those already training you’ve just got to back yourself that you’ve done enough. You’ll always think that you haven’t done enough training – like even now I sit here and think I haven’t done enough 6 hours rides, I haven’t done enough – but you have, and that’s where you want to be. You want to feel that way. Just trust your training and trust your coach, and if you haven’t got a good coach get one. For beginners, the same sort of thing – get a good coach, one that you can trust, and one that knows what they’re doing, preferably one that’s done that distance as well. Try and enjoy it as much as possible!

The support from the Allsports guys has been great, I’ve got a couple of sponsors and that now, but Allsports is my number one. I’ve got bike sponsors and shoe sponsors – but none of those work unless your body is good. These guys keep the body in check, and they’re all good physios.