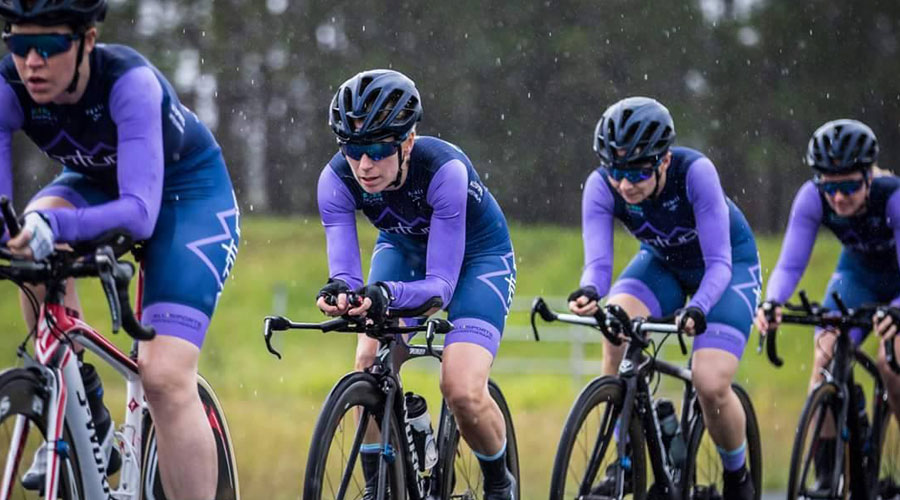 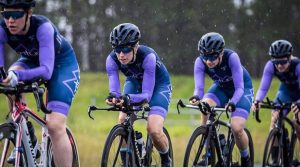 The month of February 2018 saw Optomo Altitude cyclist and Allsports sponsored athlete, Faye Goodyear out of competition due to a serious crash and in excruciating pain.

The mum of two and small business owner suffered a comminuted humerus fracture that required surgery, 13 pins to stabilise the break, and ongoing intensive rehabilitation. Fortunately, Faye is rapidly recovering and recently rejoined the world of racing.

Over the weekend, the Optomo Altitude Cycling team raced in Round 1 of the QRTS, taking out 2nd place in their divisional time trial. Faye took fifth place in the general classification; an impressive result that certainly reflects her determination, and the rehab commitments she’s made towards her recovery.

Tell us a bit about the Optomo Altitude Cycling Team, how did the group originate?

There had been some movement over some time regarding the formation of a new Brisbane women’s cycling team. Natalie Langer had been in discussion with the Altitude boys about kick starting such a team and Wayne from Optomo kindly stepped in to provide significant funding for us to start up.

What do you love about bike racing? What brought you to the sport?

I joke that I had a midlife crisis! I had ridden as a kid and also used a bike as transport while I was a student in London. Riding around England is pretty cold and wet a lot of the time so moving to Australia (Brisbane) meant a change of climate. I started doing sprint distance Triathlons with friends to get fit and lose the baby weight. Eventually, I progressed to Olympic distance but I am a terrible runner and kept having hip injuries every time I tried to increase the distance. I finally decided that I should give up the running and try some cycling racing. I began racing in C grade and progressed to B. I also won a competition which, although it didn’t work out as planned, gave me the push to move from B to A grade. I also started training with Activ coaching (now sadly closed) and got more experience. At the same time, I started getting coached by Ben Walding and this has helped my development enormously.

How is your recovery going?

Great – Saw the surgeon this week and he was over the moon with my progress. I’m still a bit sore and movement is limited but it’s improving week by week.

And the injury… how did it happen?

I was racing at Crestmead in the ‘Summer Sizzling’ series and clipped a pedal going around a corner at about 45KPH. The bike high sided. I don’t actually remember anything – I didn’t hit my head but I think the pain and shock caused a lot of confusion. First thing I remember was being in the ambulance on the green whistle!

In the early days, what steps did you take to help you quickly return to racing?

I came and saw Cam (Cameron Schembri) at the Jindalee Allsports clinic and he worked with some pressure machines to get my swelling down. My Surgeon Dr Trevor Gervais was amazed at two weeks post op to how little swelling I had as a result. I also maintained my mobility by using the exercises I was given several times a day to reduce the risk of frozen shoulder.

After your surgery, how important was it to get help with your rehabilitation?

Absolutely crucial – I progressed really fast post surgery thanks to all the work Cam did with me and the exercises I did. The one thing I keep telling everyone is if you have a fracture etc, is go and see a good physio so that progress can start. It meant that I was doing appropriate exercises and repairing as fast as I could

Any sort of hiatus is always going to difficult to come back from, so what kind of training did you complete to regain your fitness?

The first six weeks or so were really hard. I was in so much pain I could only do my physio prescribed exercises, and was still in a sling so no chance of anything on the bike – but I did some bodyweight lunges to try and keep my muscle mass up.

And what would you say has been the most difficult part of your road to recovery?

Initially the pain and then the frustration of how long it took. Everyone kept telling me how well I was going, and I was… but I’m not patient!! Poor Cam had to keep me in check – “I give you an inch and you take a mile!!” he kept saying. I fell off my wind trainer when the skewer bent the second time I got on it which caused a huge mess. The fall tore off the rear derailleur. Thank goodness I landed on my right side but it really hurt! However, I’m pretty determined so I got the bike repaired and got back on with a wind trainer.

Getting onto my Time Trial (TT) bike has been challenging too – almost there. I can get on it but can only hold the position for a couple of minutes due to pain as I have limited external rotation. However, each week is a little better.

Since returning to compete with the Optomo girls, have there been any adjustments to your training regime?

What’s next for you and the Optomo team?

Big race last weekend – Race 1 for the QRTS series, and now on to Round 2 after qualifying! Didn’t think I was going to make it back but with Cam’s professional support and a lot of stubbornness from me have got me back!